Success! Your message has been sent to us.
Error! There was an error sending your message.

Drop us a line

One of the oldest enterprises in Estonia, which includes the eponymous company with a long history, is headquartered in Tartu, Estonia.

The location wasn’t chosen by chance. The square of ground which was chosen by the founder of the workshop was located at the intersection of Liiva and Maaria streets.

At that time, this area was considered a suburb – in spite of this, it was lively and promising in terms of expansion. Workshop for the production of metal products was focused on servicing the needs of the neighborhood.

The assortment of the newly established company were household items – metal tools, doors and stove shutters, door and window hinges and locks, as well as forged metal products.

Products of a small workshop had not only utilitarian but also artistic value.

The founders of the company weren’t mistaken with the selected activity and location. Demand for manufactured products was growing steadily, this was the impetus for the expansion of the workshop.

1897. The workshop has grown to a factory status.

Together with the growth of technology and the increase in the agricultural industry needs the range of good continued growing. Also in 1897 the factory started to produce spare parts for agricultural machinery.

1914 –  14 people work at the factory. The desire to work, to develop, the ability to plan contribute to the diversity of products  – it completely satisfied the needs of the city and surrounding neighborhoods. 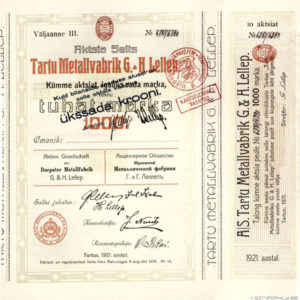 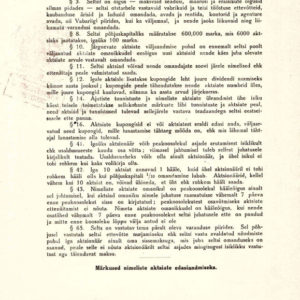 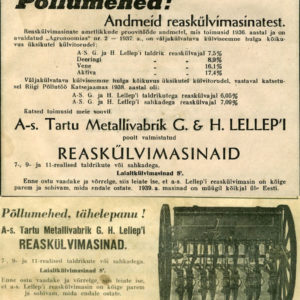 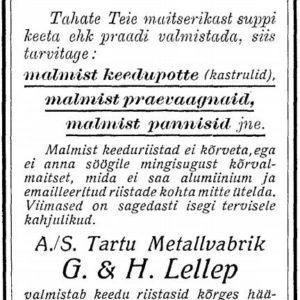 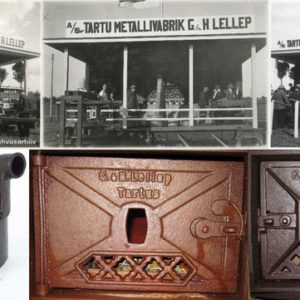 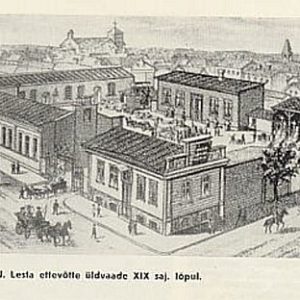 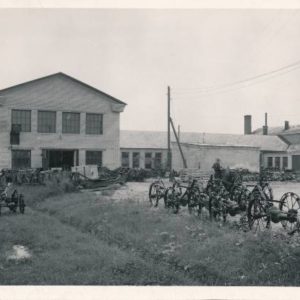 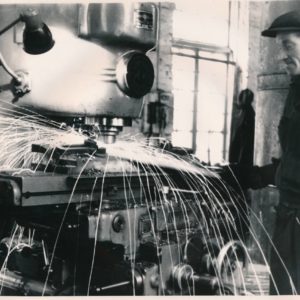 1923. At the agricultural exhibition in Tartu the company exposed its original in design and rather productive mechanical thresher, which later became very popular among the farmers.

Before World War II the production of the enterprise was known far beyond the borders of Estonia. Factory staff has grown to 129 people, which by the standards of that time was already considered a large enterprise.

1940. The change of regime in the state. The company was nationalized and got the new name “Võit”.

The changes not only influenced the range and direction of production of “Võit” factory, but also served as a strong industrial push in the direction of increasing the range and quantity of produced agricultural machinery, in connection with the accession to the Soviet Union.

The geography of deliveries increased significantly factory, the factory now became known not only in a national scale, but rose to all-Union one.

The Second World War interrupted the work of the factory, in 1944 after another bombing the buildings were completely destroyed.

1945. After the Second World War, the factory was quickly rebuilt, and the assembly line began to produce urgently needed throughout the country agricultural machines.

As it was already mentioned in the text, the plant “Võit” becomes now an enterprise of All-Union scale. It begins active export in the Warsaw Pact countries. It should be noted that the technique was constantly marked with the “quality mark of the USSR” – it was considered a high standard. 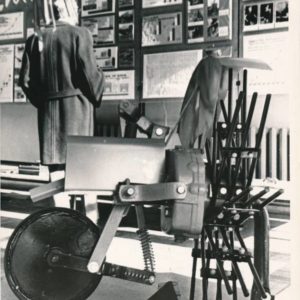 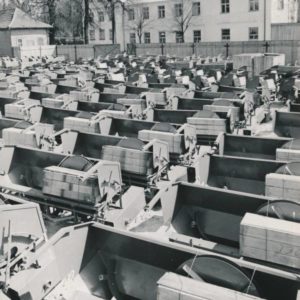 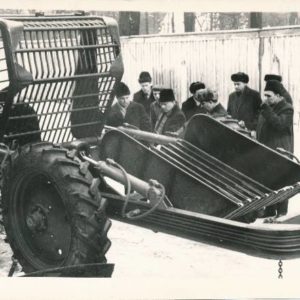 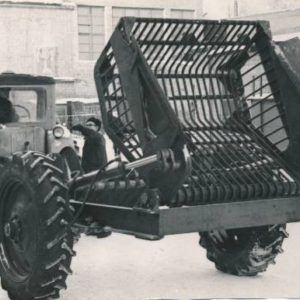 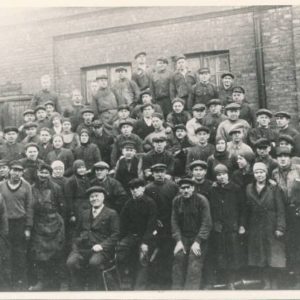 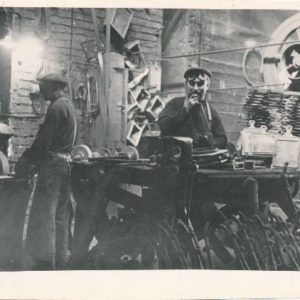 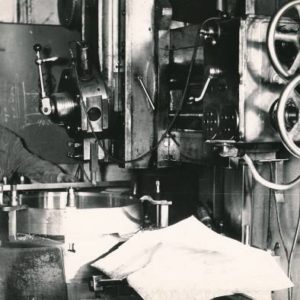 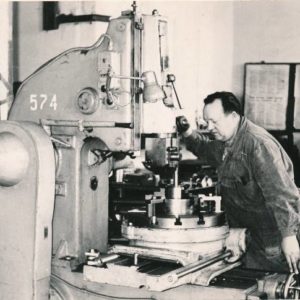 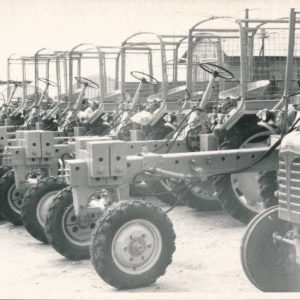 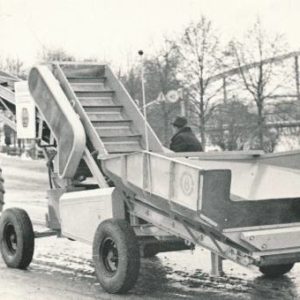 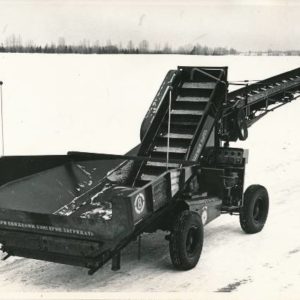 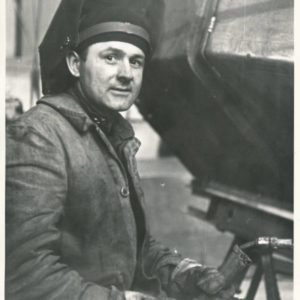 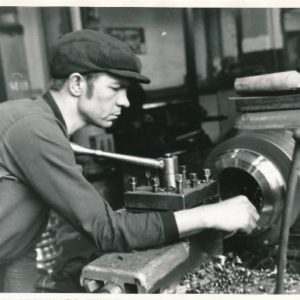 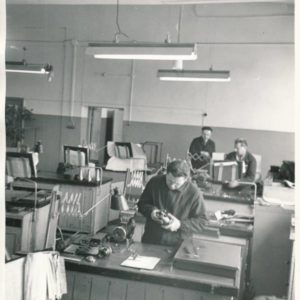 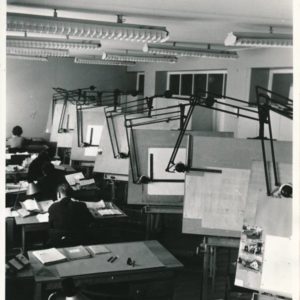 1969. A potato harvester won a gold medal at an exhibition in Leipzig. On account of the design bureau of the company there were hundreds of patents, scientific and technical developments.

1969-1990. As a result of restoration of independence of the Republic of Estonia and changes in the status of the plant, the company was experiencing difficulties related primarily to the impairment of economic ties between the countries which were formerly part of the Soviet Union, as well as between the Warsaw Pact countries. New conditions also affected the company – market economy, free prices.

The new management quickly adapted to the new conditions, carried out the diversification of the business and tune in for more profitable at that time Western market. One of the main regular customers of the plant was the company WEIMER run by Lennart Kederkvist Eric. After five years of successful cooperation Kederkvista’s company Weimer found it advantageous to rent the entire plant, including design and engineering office.

1995. The plant is fully redeveloped for the manufacturer of forestry equipment of the brands Forester, Nokka, Weimer.

2013. To increase the production range a design office was opened.

2014. Experienced marketers led by Artem Tsyganok came to our team – experts in promotion the company’s products and solutions.

2016. An agreement on opening a separate office in the Moscow region, Serpukhov was signed.

The new owner of the plant Yuri Pikk and CEO Ilya Agarev, relying on years of experience and business relationships, develop the enterprise well-known both in the West and in the East of the continent.

“High-quality, accessible, modern appliances in each forestry farm in Western and Eastern Europe!”

Centralized production and sales control system is the best way to achieve high product quality and cost which won’t have a competition.

We own the new techniques of production management and marketing which are used by the world’s leading engineering enterprises.

Our design office and production are certified according to the advanced world standards.

We constantly exchange experiences and cooperate with leading universities of Estonia and Russia.

The partner in the territory of RF: Artem Tsyganok